We offer hunting safaris in four of South Africa’s provinces namely Limpopo, KwaZulu-Natal as well as the Eastern Cape
and Free State Provinces. These provinces differ greatly in terms of habitat, prevalent species as well as the general lie of the land.

Click on the Name or the + to view more information about each area. 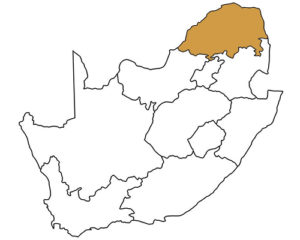 Limpopo is South Africa’s most Northern Province, lying within the great curve of the Limpopo River. It is a region of contrast, ranging from Bushveld (mixed grassland, dense Acacia Thorn bush) to mountainous areas (home to the Waterberg Mountains), primeval indigenous forests and unspoiled wilderness. The Province borders the countries of Botswana to the west, Zimbabwe to the north and Mozambique to the east. In the eastern region lies the northern half of the magnificent Kruger National Park, a nature reserve teeming with African wildlife in a total area roughly the size of Israel.

About 80 % of South Africa’s hunting industry is found in Limpopo.

A summer rainfall region, usually from late November until early March. The north and eastern areas are subtropical with hot and humid summers and mist in the mountains. Winter is mild, mostly frost-free and has very little rain in the winter.

The Kruger National Park is a Malaria area. The following precaution should be taken. Consult your Doctor or local Travel Clinic, before travelling to Africa regarding the correct medication to take. You should do this even if you have travelled to Africa before. 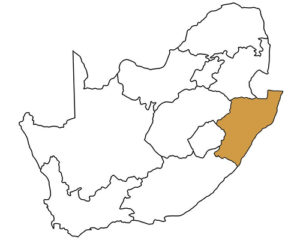 This is the garden province of South Africa. It is a subtropical streek and lies on the Eastern coastline (Indian Ocean) with a blend of savanna grasslands and forests. The province stretches from Port Edward in the south to the borders of Swaziland and Mozambique to the north.

Its Western Part is marked by dying dramatic Drakensberg mountain range, with several peaks well over 3 000 meters. Between the mountains and the humid, subtropical coastline is Savannah grassland, but there are also areas of indigenous forest along the coast.

Most of our Deep sea fishing takes place off this coastline.

This is a summer rainfall area, with a climate that ranges from extremely hot (along the coast) and it can be very cold in the winter. 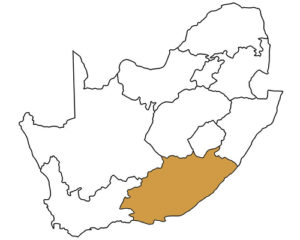 The Eastern Cape, lying on the Southeastern of the South African coast has rugged cliffs, rough seas and dense green bush of the stretch known as the Wild Coast. The province’s diverse climates and landscapes range from the dry and desolate Karroo (which lies to the West). Then you get the lush forests of the Wild Coast and the mountainous southern Drakensberg region.

Increased rainfall as one move from west to east, where it is bordered by the Indian Ocean. Frosty winters and hot summers can be expected. 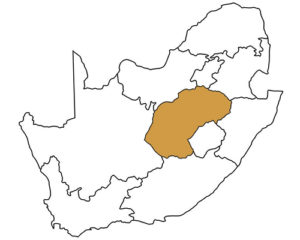 The Free State offers the breathtaking Drakensberg Mountain Range and the Qwa Qwa National Park. The Free State lies in the heart of South Africa, with the Kingdom of Lesotho nestling in the hollow of its bean-like shape. Lying between the Vaal River in the north and the Orange River in the south, the region is one of flat, rolling grassland rising to lovely sandstone mountains in the northeast. This area has very little tree cover.

SOME OF THE GAME AVAILABLE

A lot of rainfall during the year and occasional snow

We use cookies on our website to give you the most relevant experience by remembering your preferences and repeat visits. By clicking “Accept All”, you consent to the use of ALL the cookies. However, you may visit "Cookie Settings" to provide a controlled consent or select "Reject All". By viewing this website you hereby acknowledge that you have read and accepted the Protection of Personal Information (POPI) disclaimer on the link provided.
Cookie SettingsAccept AllReject All Privacy Policy
Manage consent

This website uses cookies to improve your experience while you navigate through the website. Out of these, the cookies that are categorized as necessary are stored on your browser as they are essential for the working of basic functionalities of the website. We also use third-party cookies that help us analyze and understand how you use this website. These cookies will be stored in your browser only with your consent. You also have the option to opt-out of these cookies. But opting out of some of these cookies may affect your browsing experience.
Necessary Always Enabled

Performance cookies are used to understand and analyze the key performance indexes of the website which helps in delivering a better user experience for the visitors.

Analytical cookies are used to understand how visitors interact with the website. These cookies help provide information on metrics the number of visitors, bounce rate, traffic source, etc.

Advertisement cookies are used to provide visitors with relevant ads and marketing campaigns. These cookies track visitors across websites and collect information to provide customized ads.

Other uncategorized cookies are those that are being analyzed and have not been classified into a category as yet.